I’ve been a bad with blogging about our holiday so here’s the quick short version of the last week of out holiday.

We went to Ouwehands Dierenpark, great weather was promised, it rained A LOT but we made the most of it and still had a nice day (after spending about 2 hours in the indoor playground there..).

Michael broke his photo-camera last year (a 160 euro camera he won in a drwaing contest when he was 3,5 !) while visiting the zoo; so I asked for info on repairs. Then this sweet guy, Frank Kramer responded by offering Michael his own first digital camera. Thanks Frank for making Michael a very happy kid!

As the weather is as usual during our holidays (bad), we decided to take the boys to BuildABear. Here they can pick a bear (or any other animal), help stuff it and dress it… THEY LOVED IT!

Our friends invited us to a nice dinner. While our friend was bringing his daughter to Tae Kwan Do he got into a small accident (check out the wheels…) The kids had a nice afternoon playing and we all eventually had a nice dinner (just a little later than planned).

Here’s a couple of my fave’s : 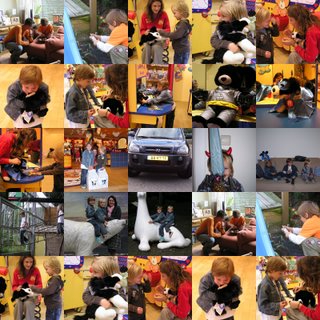