Diary by dtmslingerland11 december 200620 april 2020
Yesterday I had an unexpected crop at my house with a group of scrappin’ galls from my yahoo group. They were supposed to go to a wellknown scrapstore but due to circumstances this had to be cancelled, I offered (after checking with my guy first) my living room and giant croptable. I didn’t know everyone, so it was fun to put some more faces to names as they came in around 10.30 ! We chatted, had some of my clubsandwiches, Andrea brought some nice cakes, some of us scrapped, some of us scrapped a lot (well you know in which catagory you can place me LOL), I showed off my new cricut and we tried out some designs/sizes and had fun playing, some LO’s were made, xmas decorations, cj pages and a few diaries for 2007 and they swapped a lot of gorgeous circle journals ! I even got an idea for one, so who would like to play ? Just let me know and I’ll figure out how they workith sending around and all that !

I forgot to take some pic’s but thank god Paule & Marinka brought their camera’s ….. Here are Paule’s pics: 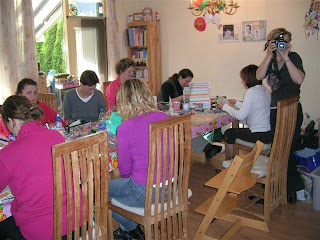 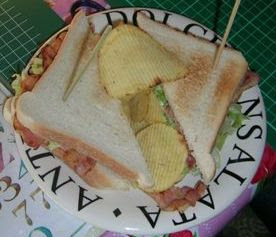 The dudes were great they went simming in the morning, to the grandparents for drinks and then came home. I thought they would go play outside for a while, but no they wanted to chill, play in their rooms (and ours) so they did. Ate chips, played computer games, ate cookies, read books, ate ice cream (hey I got the sheets to prove it….), watched a dvd and Ed even got to do some IT stuff. Every now and again Colin would pop down to check out what we were doing, we didn’t see Ed a lot (only for the food & drinks) and even Michael came down after a while (since he did want to pick his own ice cream ….) but only for a very short moment.The last girls left around 17.00 and we treated ourselves to patat (french fries) and some yummy things to go with that (so today we had to cook for a change as 2 days of fast food is against the rules LOL), we read the Wizard of Oz (a short version) and they were in bed by 7 pm (we were in by 8 pm).
A good day for all….